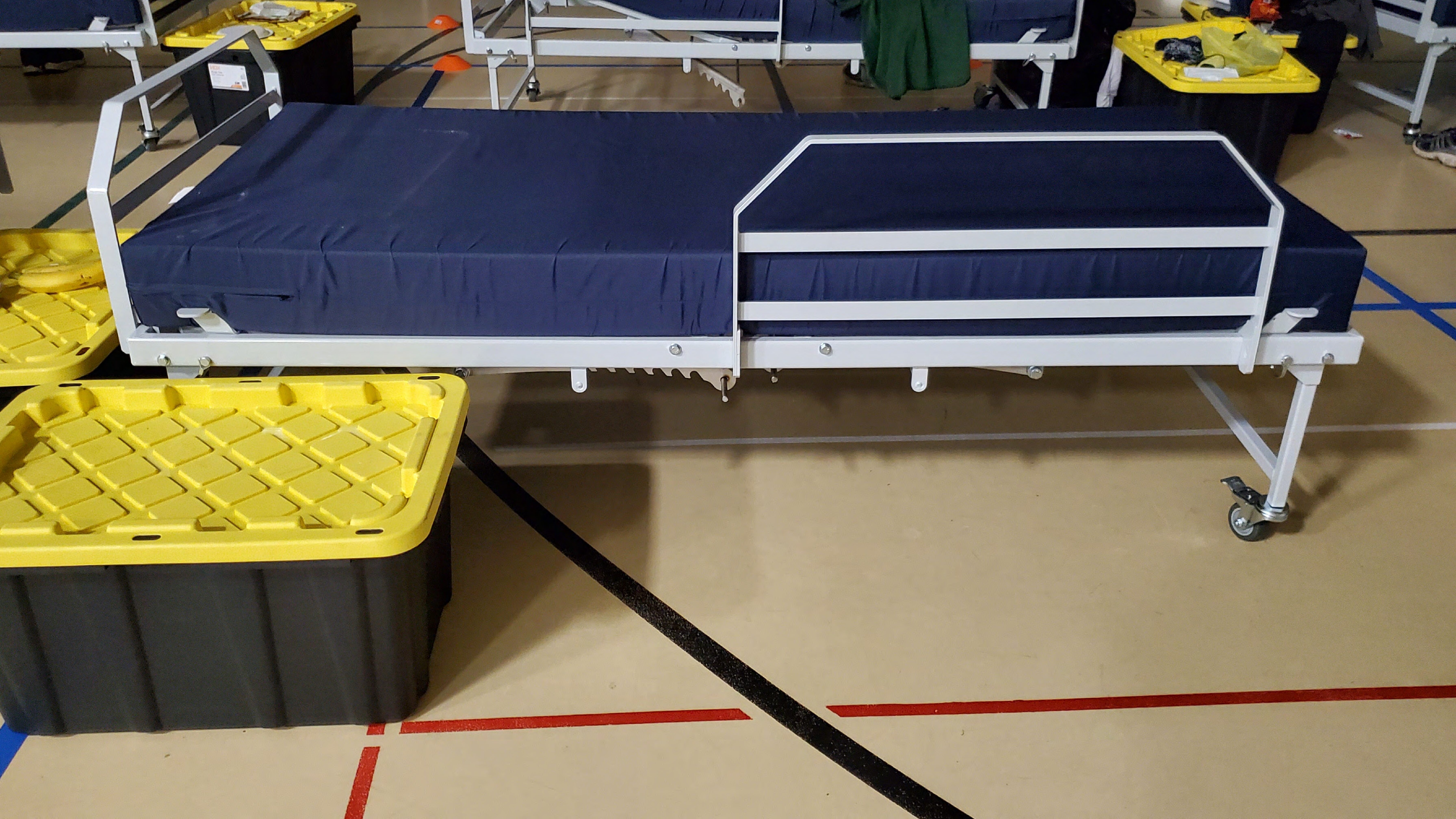 Provision in the pandemic

The silence is broken by soft snoring after 11pm. Finally, it’s quiet after hours of chaos. The screaming exchanges of swear words and threats have stopped. As I look across the gym at 49 of our city’s most disenfranchised people sleeping on Red Cross metal cots with blue plastic mattresses, there is a contentment in the sorrow. There are seven rows of seven squares, each about 64 square feet, designated with blue tape on the gym floor and corners marked with small plastic orange disks. That is their living space.  They have a cot, a metal folding chair and a Tough Tote bin with a bright yellow top in each square. Tonight they are warm, dry, and fed. Several are sleeping off a day of Vodka and drugs. Their loose tobacco and rolling papers wait on their bin top for them to roll their next cigarette. Others have spent the entire day in their cots, sleeping on and off, playing with their phones, sometimes just staring at the walls. The bin tops have become their tables holding an assortment of snacks, their cell phone, playing cards and Styrofoam coffee cups. This is C.H.O.I.C.E (Covid 19 Homeless Outreach Intervention Community Enclosure), Lansing’s temporary homeless shelter for those who chose to leave other shelters or became homeless during the time of “shelter-in-place”. It staffed and funded as a joint venture of several agencies in the local homeless service network. I am here as staff from City Rescue Mission working with college students hired by Advent House and a security guard paid through Holy Cross Services.

Before COVID 19, children played basketball on this gym floor. Parents sat on the bleachers and bought hot dogs, fountain pop, and snacks at the concession stand. Now the eight basketball hoops are raised to the gym ceiling and the scoreboard is dark. The hot dog roller and popcorn machine are unplugged, waiting behind the concession stand. The bleachers are folded up and the spaces between the railings converted to shoe racks for those with the coveted squares against the wall.  A TV on table at the front of the gym plays Netflix movies from noon-9pm every day. The concession stand has become staff space and 3 meals a day plus snacks are provided free to everyone. The locker rooms off the gym are used for restrooms and showers, disinfected daily with a Kaivac cleaning machine that sprays every surface. The people come and go as they please from 7am-9pm every day, some still wandering the city and holding signs at street corners asking for money. The threat of COVID 19 is so outside the reality they perceive that they will not keep masks on no matter how many signs are posted or reminders announced.

Most of these are the so-called “chronically” homeless, which is only about 20% of the entire homeless population. They are the most difficult cases. There are men and women as young as 19 and as old as 70. We have people with felony records, sex offenders and drug addicts, along with mentally ill, medically fragile or those just caught in a bad situation. All of them are here as their last option. The actual shelters have many empty beds but cannot let anyone else in who has not been in quarantine until shelter-in-place is lifted. Of the 44 men and 5 women in this gym I have seen all but of a small fraction many times during my past year of involvement with homeless services. Everyone here has a story of tragedy and suffering whether brought upon them by others or by themselves. While they do not represent the majority of people who are homeless, they are the image of homeless for many people, an image that many would like to forget.

Tonight, these people are not in a tent city or under a bridge. They are safe from the 32 degree temperatures. We try to keep them from hurting themselves or each other which is mostly successful. I know many have knives or other weapons in their bags or on them. That is how they survive on the streets but they are rarely a threat to me or other staff, especially those of us that are women.  There is an unspoken moral code that men “do not put their hands on women” and it is enforced with threats of street justice among themselves. If a guy is not listening to my instructions, other men will say “hey, she’s being nice to you and you’re being a ***.” There is also the ever present threat that staff can tell someone who is too difficult that they have to leave. Cold and hunger are strong deterrents. Sadly, some people still choose the streets.

Some of them look decades older than their age and struggle to walk. Women come with bruises from domestic violence situations. Men come with bruises from being assaulted on the streets or fights they refused to step away from. Some should be in an assisted living facility for physical or mental health issues or developmental disabilities but they have slipped through the cracks of social supports. They are estranged from their families if they have families. They get hurt from falling, fighting, or drinking and are taken by ambulance to be patched up at the hospital, only to walk back in a few hours later or the next day. Many have done well in rehabs for a time, even completed programs, but return to the drunken stupor of the streets with only a few hours of lucidity most days.

Just a few days ago, a man sleeping outside in one of Lansing’s tent city encampments was murdered. His name was Marcus. I knew him from many not so pleasant interactions at another location. Even when he was heavily intoxicated and swearing at us, there was always a glimmer of a different man in his eyes; the man he could have been and the life he could have lived if he was free from grips of addiction. Sadly, he had been captive for 15 years with only very brief periods of sobriety. I’ve heard addiction called a death style not a life style.

I had hoped to see Marcus in one of the local transition houses. I have met hundreds of men who have come through Endeavor House, a faith based transition program that helps men go from rehab to becoming productive members of society. Some of them spent time on streets. They recognize me from when I saw them like this. I can rarely recognize them. Their eyes are clear, their actions and speech transformed, no longer clouded by the trauma of homelessness or the power of substances.  I meet others when I am grocery shopping, they look like totally different people. Although Marcus is gone, each one of the people in this gym are capable of another life; holding a job, coming to school, or volunteering to help others, reuniting with their families, and becoming the person they truly are.

As morning approaches, I set up the 40 cup coffee percolator. They love coffee, most of them with a whole handful of sugar packets and a few creamers for a small cup. Breakfast is fruit, pop tarts, cereal, milk and OJ along with donated Starbucks pastries and sandwiches. Various bagged lunches with chips, fruit, and a sandwich arrive everyday by noon from Advent House. The City Rescue Mission delivers 50 hot dinners in Styrofoam containers every evening. The people can ask for snacks anytime during the day and into the night. We try to talk with them about strategies to end their homelessness while they are enjoying their snacks but many live life in the moment. They need far more services than we can provide here to get into stable housing. However, for the moment, they are all peacefully sleeping.

This work by Elizabeth Clifford is licensed under a Creative Commons CC-BY Attribution 4.0 International License.